The inaugural Dinking for the Pink Pickelball Tournament wrapped up over the weekend at the Brunswick Forest Community Sport Center in Leland. With over 120 players competing from as far away as Canada during the three-day event, the tournament helped raise over $13,000 for the Lump to Laughter organization. More than 120 players competed at this year’s tournament. Photo courtesy- Dinking for Pink Tournament.“We were delighted to team with the… [Read More…]

Spring is in bloom and the neighborhoods of Brunswick Forest are bursting with color and new home offerings! The community is currently offering homes in nine neighborhoods— each with its own style and take on Brunswick Forest’s trademark Coastal by Nature® lifestyle. Within these neighborhoods, new models and home sites abound with plenty of variety— ready and waiting for new homeowners. To kick off the spring sales season and to… [Read More…] 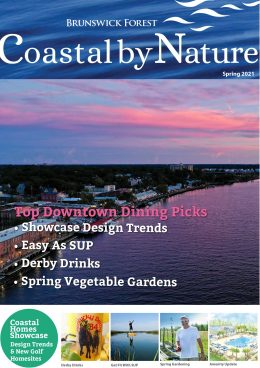