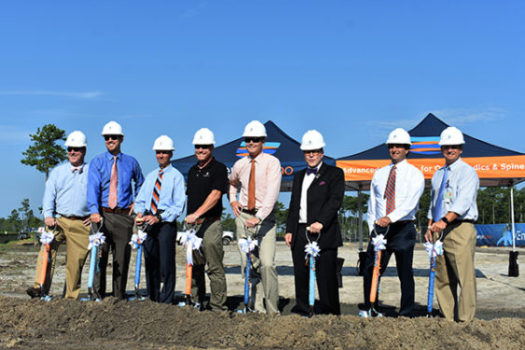 The N.C. Department of Health and Human Services has selected EmergeOrtho to build an operating room in Leland.

LELAND — After months of consideration, the N.C. Department of Health and Human Services has selected EmergeOrtho, under the name Brunswick Surgery Center, to build a new operating room in Leland.

The selection is conditional, requiring EmergeOrtho to comply with a number of stipulations before final approval is issued and construction can begin.

EmergeOrtho was competing against Novant Health, under the name Novant Health Brunswick Outpatient Surgery, to build the operating space. EmergeOrtho proposed to build a $4.2 million ambulatory surgery center with one operating room and two procedure rooms, which would be completed by January 2019.

EmergeOrtho’s plan adds on to an existing facility at Brunswick Forest and would offer space for orthopedic surgery.

Novant proposed developing a new $14.1 million ambulatory surgery center. Its plans called for relocating one of its existing operating rooms from its Supply-based hospital to the Leland area for a total of two operating rooms. The project also would’ve been completed by January 2019.

Novant has until May 30 to file an appeal to the state’s decision, but a spokeswoman has not said whether it will file an appeal.

Reporter Makenzie Holland can be reached at 910-343-2371 or Makenzie.Holland@StarNewsOnline.com.