Raising the Steaks: Brunswick Forest is a Great Place to Grill This Summer 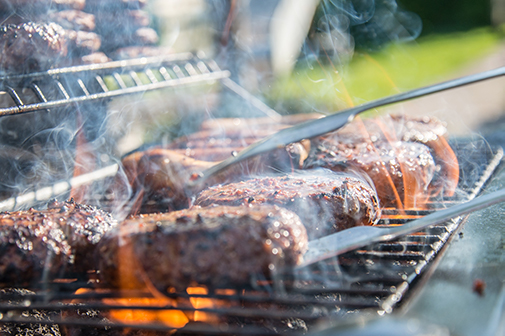 Whether it be corn on the cob, hot dogs or burger patties, the smell of gas and charcoal wafting through the air is a tell-tale sign that summer is approaching. Residents living at Brunswick Forest have plenty of open areas where they can grill out and hold small picnics for outdoor fun. So, make sure you get your apron out and pay attention, here is how the art of grilling and barbecuing has evolved.

It does not take a gastronomy major to appreciate the thrill of cooking over an open flame, as grilling has been an American tradition for quite some time. How did this tradition first start? Historical sources point towards Native American tribes first using the concept of smoking meat over fire pits for thousands of years. For many centuries, “barbacoa” was used in Latin America to describe cooking with roasted meat on a wooden structure. Eventually, the term was modified to “barbecue.”

The type of wood used also gave a certain quality to the flavor of the meat. This method was then adopted by American colonists, especially in the Southern United States. Today, barbecue is a term that often describes “pit barbecue,” the art of roasting meat or root vegetables below the surface of the ground. Many barbecue pits today use smokers and involve cooking meat, mainly pork, slowly over a long period of time. There are several different styles of barbecue, including Carolina style, Memphis style, St. Louis style and many more. Barbecues were often massive efforts prepared for large gatherings, religious events, and family activities. This tradition can still be seen today with Southern Pig Pick-Ins. But when most summer patrons think of grilling out, they often refer to doing so using one of three methods: charcoal, gas-fueled or electric.

While there is still debate over which method produces the best tasting grub, there is no denying that grilling and barbecue in general is a big part of American culture. Be it in your own backyard or in a more open outdoor space, Brunswick Forest has the areas you need to make grilling a special occasion. Annsdale Park has several acres of open green space right in the heart of the community. If you have a portable grill, there is plenty of space to cook up some good times with friends. The Community Commons also offers a nice open area for grilling and picnicking.

Brunswick Forest is where summer fun happens almost all year long, just outside your front door. Grilling is a great way to make your guests happy and enjoy the great outdoors! If you love grilling, share your favorite creations on Brunswick Forest’s Facebook page.