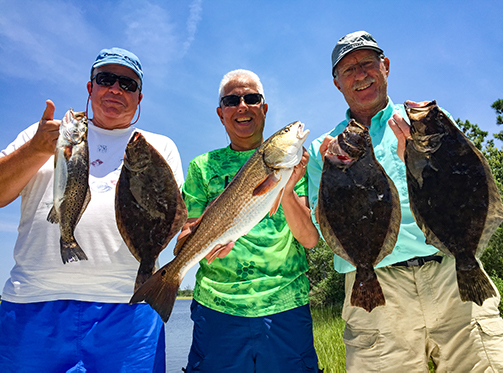 Brunswick Forest is situated next to many areas that allow for an abundance of activities. Residents can take advantage of multiple beaches, the Cape Fear River, several nature parks and downtown Wilmington. With so many waterways and natural wetlands nearby, it’s no surprise that the greater Wilmington area is teeming with fishing spots!

Whether you’re looking to do a little offshore fishing, or cast a line in the Cape Fear River, both salt and fresh water come together to provide you with a great experience. The Cape Fear region also has plenty of estuaries and marshes that act as a nursery for marine life. This leads to a pristine area for spending a day fishing for both sport and culinary purposes. Here are some of the more popular fish that Brunswick Forest residents can catch in the area:

Red Drum is one of the most popular fish among inshore anglers. Known by many names including “Redfish” and “Puppy Drum,” these fish have been caught by many North Carolina anglers. Red Drum have a range that covers anywhere from the coast of Florida to Massachusetts and are found in intracoastal waters. During colder months, Red Drum will congregate near oyster bars, seagrass, sandy bottoms and spring fed creeks. Their body can be described as copper or bronze in color, with large scales covering their surface. Most noticeable of all is the distinct dark colored spot near their tails, which make Red Drum easily distinguishable. This fish can get up to 61 inches in length and is known for its massive fighting power. These powerful game qualities are why fisherman have given male Red Drum the nickname, “Bulls.”

King Mackerel are without a doubt, one of the most spectacular fish that any angler can hope to hook in the waters around Wilmington. Long and slender with greenish-blue backs, King Mackerel can grow up to 72 inches in length! This fish loves open ocean waters near the coastline, such as the mouth of the Cape Fear River. Their habitat ranges from North Carolina to Southeast Florida and will move along the coast during both the Summer and Autumn seasons. King Mackerel love to go for live baits such as Menhaden and Mullet. Fishing from both boat and pier are most common for anglers looking to reel in King Mackerel, who are known to “skyrocket” out of the water when chasing food. Their spectacular gaming qualities often make King Mackerel the centerpiece of many fishing tournaments. This includes tournaments such as the one held in Southport, just minutes away from Brunswick Forest.

Brunswick Forest’s proximity to many fishing areas, creates an abundance of opportunities for all who are interested. Residents like Kevin Carpenter, Clark Wheeler and John Thuman love spending some time out on local waters reeling in a fantastic catch! There’s even a club at Brunswick Forest for those who share the love of fishing.

Here is a list of some great local fishing spots in case you feel a day of fishing is next on your agenda: