Historical Richness in Our Area 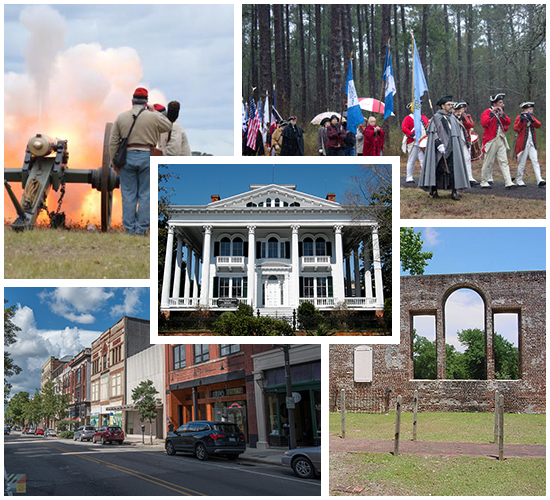 There’s nothing quite like the thought of ideal living down in Southeastern, North Carolina. Pristine beaches, warm weather and all the creature comforts you could imagine with your ideal vacation spot.  Picture that setting, but living in a perpetual vacation mode for the rest of your life, and you’ve got the picture of what life is like at Brunswick Forest! It’s more than just the lifestyle that’s enamoring to so many, it’s the rich history that is bound to capture your interest no matter where you go.

As one of the first American Colonies, North Carolina’s history can be traced back very early to the American Revolution.  A few miles outside of New Hanover County lies Moore’s Creek National Battlefield, the site of where a force of 1,000 Revolutionary Colonists engaged in a skirmish with 1,600 British and Loyalist forces on February 27, 1776.  Nestled around the historic bridge leading across the wooded creek, historic reenactments often take place to re-tell the battle to visitors and guests.  The reconstructed earthwork defenses still survive today, giving you or your family the opportunity to experience the history that was waged there so long ago.  Moore’s Creek marked the very first decisive Patriot victory of the Revolution and is an amazing historical experience for anyone looking to learn about American history.

Not far away from Leland on the Brunswick County side of the Cape Fear River, lies the ruins of Brunswick Town and Fort Anderson.  Long ago this Brunswick Town made up the first permanent settlement of the Cape Fear Region, founded in 1726 and destroyed by the British in 1776 on the eve of the Revolutionary War.  It was later incorporated into Fort Anderson during the American Civil War. For anyone looking to experience the ruins of the old church, Governor’ houses, as well as the old earthen mounds from the Civil War, you might want to give this serene area visit.

Equally as historically significant, is the battle that took place at Fort Fisher.  When you think of the Fort Fisher/Kure Beach area, many people think of the awesome Fort Fisher Aquarium.  However, the dunes there hold more than just fun at the beach.  The Two Battles of Fort Fisher that took place December 1864 – January 1865, was the site of one of the most significant turning points of the American Civil War.  Dubbed “…And Oh How We Suffered” the upcoming 154th anniversary of the battles that took place at Fort Fisher will be taking place this Saturday January 12th.  Taking place from 10 am to 4 pm, you can watch history come alive as several demonstrations will be going on during this time.  You can witness live artillery demonstrations of the site’s restored 32-pound cannon, the bronze 12-pound Napoleon cannon, and 10-pound Parrot-rifle.  Local photographer Henry Taylor will also be on hand to demonstrate his 1860’s wet plate style photography, and reenactors will be there to answer any questions that you might have about the lives of the Soldiers that manned the earthen defenses so long ago.  Fort Fisher is an experience that is surely not to be missed by any history buff, as well as great fun for the whole family!

Known Nationwide for its historical value, the city of Downtown Wilmington is only a short ride away from the Leland area.  With a mix of locations that date from Colonial, Antebellum, and 20th Century Periods, there is something for everyone in Downtown Wilmington!  The Burgwin-Wright House, Bellamy Mansion, Thalian Hall, and Latimer House are all merely a handful of the opulent and beautiful historical homes to explore Downtown.  Each with its own story from its own time period.  Walk along historical brick and cobblestone streets and enjoy an incredible array of local shopping and dining facilities, or wind down with a relaxing walk on the River Walk at sunset.  Perhaps the most famous landmark of all is the Battleship North Carolina which served honorably in WWII and is open to tours on the other side of the Cape Fear River!  Be it for dining and drinking, entertainment, or just relaxing by the river, there are few who will not find themselves smitten by Wilmington’s rich historical culture.

History is a good part of the coastal Carolina lifestyle, and Brunswick Forest encourages you to venture out and embrace it! Each street corner has a voice and each brick has a story to tell.  Next time you’re out and about, consider learning more about your local area by visiting these incredible places and more!