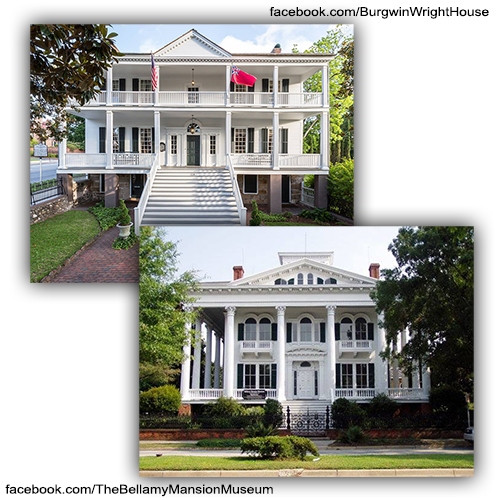 The Port City of Wilmington, North Carolina holds some of the richest cultural history on the East coast. Since colonial times, it has established itself as an important city of trade and commerce. From shipbuilding to turpentine production, the city of Wilmington has engaged in business practices that have brought the area great wealth and prominence.

Major figures from different points in history left their legacies in what are now some of Wilmington’s most beautiful historic homes. Some of these homes are privately owned and some are open for tours. Here are but a few of some of the most beautiful homes you’ll find anywhere in the Southeast.

The Bellamy Mansion remains one of North Carolina’s most spectacular examples of Antebellum architecture. Built on the eve of the American Civil War, the Bellamy Mansion has deep cultural significance in terms of the family that lived there, the people who built it and all the building has seen. Considered very innovative for its time, the mansion was the brainchild of Dr. John Bellamy. Bellamy was an accomplished physician and landowner, who was well known for his wealth throughout Wilmington. The well-known home was always a centerpiece of the city, housing two generations of the Bellamy family. The Bellamy Mansion was built between the years of 1859 and 1861, incorporating the architectural styles of Greek revival and Italianate. This breathtaking historic home has no less than twenty-two rooms and was constructed entirely by both enslaved and freed black artisans. Several defining features of the property include its gorgeous gardens, slave quarters and museum. During the end of the American Civil War, after the invasion of Wilmington, Union troops occupied its luxurious halls. In time, the mansion was returned to the people of Wilmington, and was opened as a museum. The Bellamy Mansion still stands today as a major tourist attraction in our local area. Several art exhibits, weddings and other special events are often held amongst the Mansion’s beautiful gardens and interior. Tours are given every week to the general public. If it’s historic significance you’re looking for, the Bellamy Mansion is a true treasure.

Just down the street from the Bellamy Mansion is the equally well-known Burgwin-Wright House! Built in 1770 this home dates to the colonial era and is the only structure in Wilmington from that era open to the public. Also unique to the Burgwin-Wright house is the way it was constructed. The home is built on the foundations of the old city jail from 1744. It’s a fine example of Georgian architecture at its best, and the rooms of the home are still furnished as they would have been back in its prime. The gardens feature a style of horticulture unique to the Colonial period, making it the perfect romantic setting for any wedding or garden party. The original owner of the home, John Burgwin, was a successful merchant and originally intended this residence as his main seat of business in Wilmington. During the American Revolution, the property was sold to Joshua Wright. The home was also briefly lived in by Lord Cornwallis of the British military, after the redcoats occupied Wilmington in 1781. Standard Oil Company was planning to demolish the home in the 1930s and replace it with a gas station, but luckily the community campaigned for seven years to have the home protected. In 1951 the home was finally opened as a museum dedicated to educating visitors about its long and illustrious history. The home really comes alive during the holiday season, and we highly recommend you stop by this wonderful home at least once.

These historic homes are some of the best in the Southeast! If you haven’t seen these standing pieces of history before, Brunswick Forest highly encourages you to visit them and these other magnificent homes in the greater Wilmington area: