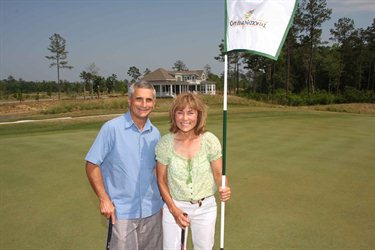 Sandy and Heidi Ergas came to coastal Carolina seeking a brand-new environment for a fresh beginning. Being the pioneer couple to build their fantasy home on the golf course at Cape Fear National in Brunswick Forest gave them the opportunity they were looking for, and they couldn’t be more content. A year and a half ago, the newly married couple decided that it was time to relocate from their 60 acres in Johnstown, Pennsylvania, which was complete with three horses (two Tennessee Walkers and a young, spirited Quarter horse).

“Sandy’s first wife passed away a few years ago,” says Heidi. “The children were all moving to different states, and this last year was very busy for all of us.”

“One of my sons got married, my daughter was going away to college, and my other son, an ophthalmology resident, was moving as well,” Sandy continues, “and we just got married ourselves. So, we felt like it was the right time to move on.”

Since Sandy and Heidi like to live a healthy lifestyle, they sought a climate where they could pursue their outdoor activities with little worry about cold weather.

Luckily, Sandy received two job offers — one in Sedona, Arizona, and the other in Whiteville, North Carolina.

“We opted to live in a place near beaches and one that barely had a taste of the winter season,” says Sandy. “We are very glad that we chose North Carolina.”

The couple visited the areas of Southport and Whiteville but wanted to live closer to the city of Wilmington. They both believe Wilmington is such a quaint town. They love the entire area’s history, unique character and all of the entertainment it provides.

The town of Leland attracted Sandy and Heidi because of its proximity to Wilmington and the beaches. They soon discovered a house to rent in Brunswick Forest, which allowed them time to locate the perfect property to build their dream home.

With their living arrangements made, all they had to do as move. That was an adventure in itself. Sandy was busy moving his daughter, Lindsey, to Iowa to attend veterinary school. So Heidi and their 17-year-old dog Fire, made the initial trek by themselves, towing a 20-foot boat.

“It was scary,” says Heidi, “because I had never towed anything before.”

“On top of that,” adds Sandy, “she missed an exit on the turnpike and had to travel 70 miles in the wrong direction before she could turn around.”

Moving took several trips back and forth. Plus, preparing their horses for the trip took advance groundwork because they had to find place to board them. However, this is when the Ergases experienced their first taste of Southern hospitality at its best. They met a Delco couple who would eventually be their horses’ caretakers.

“They took their time talking to us and showing us around their farm,” recalls Heidi. “Then they invited us in for drinks and were ready to talk horses. They are the nicest people.”

”At last, with the move behind them, Sandy settled into his job at Columbus Regional Hospital in Whiteville as an ER doctor. Heidi chose to take some time off as an ER nurse and get their life situated here. It was time to focus on finding a permanent place to live.

“We knew that we wanted to stay in North Brunswick and that the property had to be well-backed by woods,” says Sandy.

“One day,” Heidi continues, “Kim Fanelli [Sales Executive at Brunswick Forest Realty, LLC] told us that she just got word of the specific properties that were going to be sold on the golf course at Cape Fear National, and we should take a look.”

“Jeff Earp, one of the developers, actually walked the perimeter of the lot with us and helped us visualize what it would look like,” says Sandy, because at the time, nothing had been cleared yet.”

The Ergases were so impressed with the lot they bought it that day. Being the privileged first to see the initial six lots on the golf course, they were able to choose the biggest one on their street (.9 of an acre). A pond encompasses one side of the property; the golf course is in the near distance, while woods and a nature preserve face the back. They felt lucky to find such a special and beautiful piece of land, so they chose to build a custom home that would maximize the landscape’s striking features.

Their next step was choosing a builder and an architect from a provided list. They picked Fogleman Associates, Inc. as their builder and John Croom with Cornerstone Residential Designs as their architect.

“They were both so easy to talk with and they listened to what we wanted,” says Sandy. “They designed and built us a beautiful house.”

It was a coincidence that Vann Fogleman’s wife was from their own hometown.

“We didn’t know that until after we chose them,” says Sandy. “It was fun talking about some of the same places and people from Pennsylvania.”

It also helped put them at ease when facing the challenge of building new home.

“We had never built a home before, but we knew that we wanted a bright, open first floor with a comfortable and private upstairs for our guests,” says Heidi, “and plenty of windows, porches and decks.”

Two plans were drawn up, and the Ergases were faced with another tough decision.

“Heidi and my son, Jeremiah, who is a structural engineer, picked one plan, and my other son, Heath, and I chose the other plan,” Sandy chuckles. “We went with their plan.”

The Ergases had a positive building experience. There were a few minor bumps in the road — being the first to build on the course and the first to acquire water, cable and mail service — and the process took a year and a half to complete. However, Sandy and Heidi feel that it was well worth all of the planning decision making and effort. There were times when they had natural uncertainties about their choices on specific items for the house, but it all came together in the end. They think that their house fits them perfectly.

Their home has 3,400 heated square feet, which includes three bedrooms, a bonus room, a dining room, a study, three and a half baths, a great room, a laundry room and a kitchen with a pantry. Ample full-length windows set off the outside scenery. Several decks and porches with a built-in grill on the patio allow for outdoor fun and relaxation.

It is difficult for them to pick their favorite feature. Sandy likes the great room, decks and sound system, while Heidi adores the kitchen.

I love to cook and I’ve always felt that the kitchen is the center of the family, says Heidi.

The couple has found that they enjoy grilling outdoors, as well, especially during sunset.

While we watch the sunset off of our porch, the birds are happily chirping, soft music is playing and the sprinkler’s mist catches the sunlight … it is all so pretty,” describes Heidi, “… it is like a dream. It reminds me of that bumper sticker that says, ‘Your vacation is my life.’”

Sandy and Heidi love their secluded area in Brunswick Forest and all of the amenities that the community offers.