A Spread of Holiday Festivity 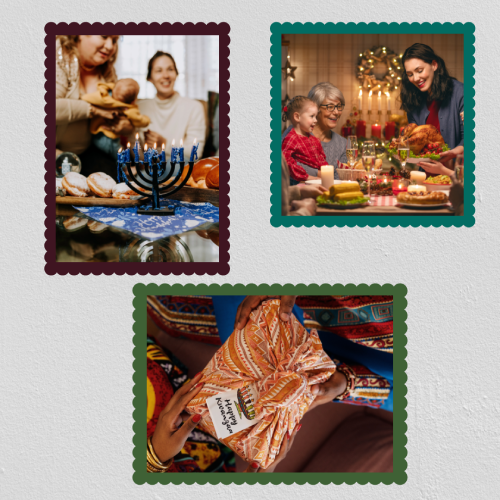 December is a time of festivities, thankfulness, and feasting! So, whether you try to channel old Ebenezer Scrooge with a Christmas Goose for every table or plan to cook the perfect latkes for the rest of your Hanukkah celebration, Brunswick Forest has a few delicious tidbits to get you in the spirit.

The origins of feasting during the winter season go back to ancient times. The Celts often had harvest festivals to celebrate the change in the weather, and some sources point to the very first Christmas celebrations back in Roman times. Just like in modern society, holiday feasting traditions could be seen all over the world this time of year. Many agree that the meaning behind such gatherings was to celebrate togetherness and plentifulness.

The most common holiday spread in December that most Americans are familiar with is the Christmas dinner. What you might not know is the historical roots of the American Christmas dinner draws a lot of its roots from Victorian Era England. During this time, there were many traditions popular in England that carried over to the United States from our time as a colony. One of the most important is the Christmas turkey. Though more traditionally British, the concept of having a roast beef at the table also took off in America. Christmas pudding from England eventually evolved into our version of the dish we call “fruit cake.” Americans have also become partial to the traditional Christmas ham as well.

Christmas menu items have great significance all over the world and are just as diverse as the people who celebrate the holiday. Here are some additional holiday spreads from across the globe that people partake in:

While Christmas is often talked about, there’s a lot to be said for the unique foods consumed during another well-spoken December holiday: Hanukkah. The famous “Festival of Lights” celebrates the ancient victory of the Maccabees over the Syrians. Once retaking their beloved temples, the Jewish Maccabees re-lit a Menorah to commemorate the occasion. Though they only had enough oil for one day, the candles burned miraculously for eight nights. What does this have to do with a Hanukkah holiday spread? A lot! Lots of traditional foods for Hanukkah involve fried foods, as the oil symbolizes the same burned on each night. One of the most well-known fried foods for Hanukkah is the latke, a fried potato pancake often eaten with a dollop of sour cream. Kugel, a traditional side dish, is more like an egg noodle casserole. The dish is often made sweet with the additions of nuts, fruits, cinnamon, and sugar, but can also be made savory with vegetables. But the food at Hanukkah goes beyond just fried food like latkes or doughnuts, as brisket is also enjoyed at supper time. Though a bit different, Hanukkah, like Christmas, focuses on sharing something delicious with the people close to you.

While the youngest of the December holidays observed in America, Kwanzaa is just as important as Christmas or Hanukkah. Kwanzaa celebrates the importance of African American culture and hopes it has helped shape society and families alike. Many dishes that are a part of Kwanzaa tend to go back to the roots of African traditions, including meals and sides that are simple but delicious. Sweet potato biscuits and cornbread are two delicious staples during this time of year. The table will also have a variety of different meats and cooking styles during Kwanzaa, such as African Creole, Cajun catfish, jerk chicken, Jollof rice, or groundnut stew which is a tasty dish from the Western coast of Africa. Side dishes like collard greens, okra, Kwanzaa slaw, beans, and rice are also popular. For dessert, ambrosia, coconut cake, sweet potato bars, and mango pound cake are traditional ways that people end their day with a sweet finish.

Regardless of which holiday you celebrate this winter, Brunswick Forest recognizes the importance of time spent with loved ones. We wish you time well spent surrounded by family, friends, and delicious food!